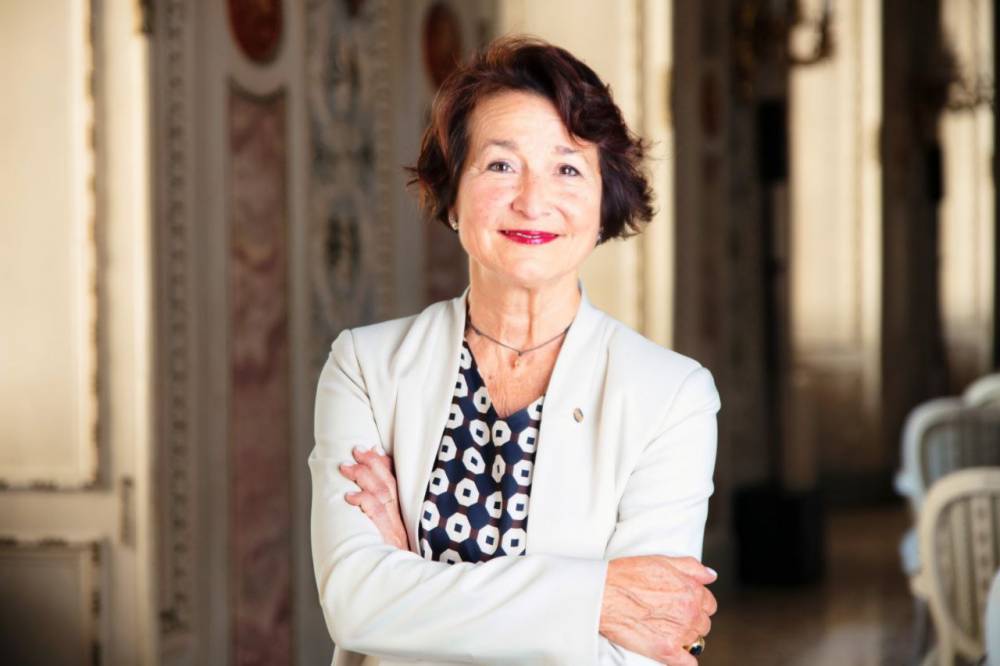 The Union President has presented her program and has involved us with her operational enthusiasm and solid experience.

Giovanna Guercio has given us a complete overview of her team and the range of project-services foreseen for her term of office.

If you ask Giovanna Guercio to tell the story of the Soroptimist, she replies that she is not a historian but that she recognizes in Soroptimist Tale some inspiring models for her and for all women.

First of all Violet Richardson, the founding president of Soroptimist International in 1921 and a pioneer in American physical education for schoolchildren.

Violet lived her life accordingly, as an active member in her community who was committed to creating opportunities for girls and young women. Short meetings with few topics, operational and effective commitment and the motto “It's what you do that counts”: Violet spoke to us in a contemporary language, the language that Giovanna Guercio also likes. But that's not all. Giovanna also shares with Violet the attention to quality education as a real resource and opportunity to reach the full potential of women and to live their dreams.

There are many projects underway. In the two-year period 2021-2023, in line with her motto "Accelerating Change" and in full compliance with the statutory and programmatic aims of Soroptimist International, Giovanna Guercio outlined a series of concrete actions aimed, on the one hand at overcoming the gender gap and on the other to the advancement of the female condition.

The "Orange the World" campaign to combat violence against women; the "City that I would like" to promote a city fit for women; the "Culture of Women for an Eco-sustainable Culture" in support of women producers of local food excellence: these are just some of the commitments that the new President has included in her national and international program.

Among Giovanna's priorities is the project “The Forest that Plays” which she presented during the meeting that was held on 3rd October in Rome to celebrate the Centenary of the Association. Over 5 thousand spruce trees will be planted to revive one of the main valleys of the Dolomites in Val di Fiemme. The forest was destroyed by the Vaia storm that hit Italy hard in 2018. Also, this project in the Giovanna Guercio program is somehow linked to the SI origins as one of the first projects undertaken by the Soroptimists was to save the Oakland redwoods. (SOS - Save the Oakland Redwoods).

But the theme that most of all excited the members of the EmpowerNet eClub on the occasion of this meeting with Giovanna Guercio, was that of orientation and experimentation, both considered by the President to be the two essential elements for quality training. Orientation and Experimentation are part of the Stem project created in partnership with IBM and numerous universities to break down gender prejudices with respect to scientific subjects, allowing young women students to broaden the horizon of their academic choices. IBM specialized women as teachers will accompany girls to discover creativity, interdisciplinarity and the value of scientific disciplines. This university path, through classroom sessions and experimental laboratories, will encourage them to continue their scientific studies without ever thinking of being inferior to their male colleagues.

In this context of qualified training free from gender biases, the "Beyond the Job" foundation service of the EmpowerNet eClub finds many links. Both projects have among their objectives that of promoting training together with the development of soft skills and of affirming professional competence to guide young women towards the world of work in general, and towards specific work areas that perhaps they would never have thought of!

The common thread, to the description of each of these projects during the meeting, was the curiosity that fuelled every member of the club in asking questions and proposing to be involved in many of these initiatives.

Following the motto of Giovanna Guercio, the EmpowerNet eClub with energy, passion and professionalism will get to work to accelerate the time of a concrete female leadership, essential to guarantee economic growth, control of the consumption of natural resources, improvement of well-being of the community, the re-launching of the competitiveness of the production system and the creation of jobs and employment: let's accelerate change!